How to Audition for The Voice 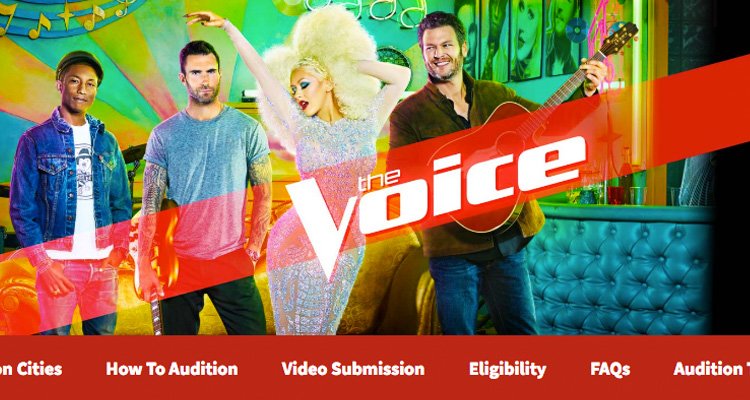 School is winding down, summer is around the corner, and folks are hopping on planes, trains, and automobiles to make it to their audition. Can you see your voice making the judges turn their chairs around during “blind auditions”? Let me tell you how to improve your chances of making that happen so your mamma can see her baby on TV.

We’ve all seen The Voice. I bet you even have a favorite judge who’s team you’d like to be on. But in the end The Voice is a TV show. And what are TV shows ultimately after? Sky high ratings! Of course there have been those who’ve come to enjoy great superstar success after having been placed in front of millions of people, right? Right?!? I can’t seem to think of anyone. Can you? You know why? The show is here for ratings and not necessarily here to make you a star, so if you’re hoping for superstar status simply because you’re turning chairs around in blind auditions, you might want to pin your hopes to something else.

This isn’t to say that there haven’t been former contestants and winners who haven’t experienced some form of musical successes post show, you know, like a bump in visibility or some choice pairings with other talent, but your success is in your hands and you have to arm yourself with information and then take action based on that information. Keep people around you who have your best interests at heart and aren’t there for you simply because “you’re that guy/girl who auditioned for The Voice”. Be honest with yourself. Know what your capabilities and limitations are. Never put on a fake or phony facade. The audience wants the real you, and not some cruel version of what you think you should be. Make the most of your time under the tutelage of the judges and glean insight all around you.

Now back to the audition for the TV show (yes, TV show). It’s all about the ratings, remember? So if you want to help the TV show sell higher priced ads (think about all the ad placement within the show itself) and not necessarily make musicians famous, here’s some advice for you that comes straight from the mouths of those who’ve walked where you’re trying to go.

Oh, and once you win your audition for the show, don’t forget that you’ll be bound to a Non-Disclosure Agreement (NDA) that can potentially hold your tail to the fire for $100,000 if you speak about the show in any way outside of the guidelines set forth in the NDA.

At the open call auditions, have two a ccapella (music made only using your voice) songs ready. This is a no instruments allowed scenario designed to hear your authentic unenhanced voice. The auditions are conducted this way to quickly weed out the folks who may be better off playing tambourine somewhere instead of singing on a national platform. At the call backs, you’ll be allowed to accompany yourself on guitar, piano, sing to a track, or even have an accompanist. For this, you’ll need three strong songs.

Choose popular songs released in the last 5 years. This is a requirement for call backs so you might as well align your music mojo to their rules.

At least two of the songs should be upbeat. At the open call, make both of your songs upbeat. For the call back, use two upbeat and one midtempo (slower tempo) song. Using three upbeat songs is better, but if you can belt out some Ed Sheeran or Adele, then by all means, go for it.

Remember what I said about being yourself and know who you are? Judges, producers, and casting directors are highly skilled in sniffing out the fakers and phonies. Be your best self. Know what songs you’re better at singing and showcase that talent. Just do your personal best. They are looking for strong singers authentic singers. Stick with what you know works for your style and vocal range.

Be consistent. Don’t start out strumming your guitar and singing a Coldplay song then end up singing some Lady Gaga to a prerecorded karaoke track. Yes, both are great artists to emulate in their own right, but they are two totally different musical styles.

Dress for the job that you want to get. This goes for more than just the business world. You wouldn’t show up to an interview for a corporate job wearing sweat pants, right? Dress in clothes that fit your personality and style of music. Study what your more successful same genre peers are wearing for some inspiration. You can always take a particular look and make it your own. If the TV show is looking for artists, dress the part of one.

Work it. You got this. Your personality should be one that attracts and not repels. The casting directors are looking for, say it with me, good ratings! Do your interactions with others in the room leave a lasting impression that makes folks want to be in your presence once again? Then good! Try initiating conversation and just shoot the breeze with those around you. Be mindful, though, you don’t want to shoot yourself in the foot by demeaning another contestant or speaking ill of staffers. You never know who’s listening, but know that someone is always paying attention. Work the room like you own it, respectfully. If you’re a charmer, then charm. If you’re the dry humorist, tell a joke.

Relax and be your most confident self. Butterflies are a good thing. You can channel those into confident singing. What’s wrong with being confident? #DemiLovato

The callbacks will have tons of equipment- mics, stands, monitors, keyboards, and cords for you to plug your guitar into. Don’t waste your phone battery while you’re waiting. This is gonna take some time. You will need to use your phone to play your prerecorded track you’re singing along to, so make sure everything is all cued up and your phone is in airplane mode. Nothing worse than having your moment that could lead to your moment in the spotlight thwarted by that one person who you haven’t talked to in years calling at the worse possible moment.


Everyone’s got a story to tell. What’s yours? You’ve seen those backstory montage videos that are played right before a contestant sings. Casting directors want to hear a unique and interesting story that will help with ratings! Have you overcome some tragedy? Do you have an interesting relative? Is your job one that impacts others? Have you had an unreal experience while performing? Have your interesting story together before you make it to the casting directors. Sharing these kinds of stories with the casting directors will make it easier for you to win over the producers when they watch your tape.

The private auditions likely take place in every city in which an open call is made. What draws producers to the town are Youtube videos. These aren’t the videos with thousands of subscribers and tons of views. Theyse are the good and talented singers. If you didn’t already know, you have to communicate your talent though video and Youtube is a free place that’s easily accessible to advertise your talent by performing on your own Youtube channel. A Bandcamp page and Facebook profile couldn’t hurt you either. Matter of fact, a Bandcamp page makes it even easier for artists to be searched by designated locations.

Know your material better than the back of your hand. You’re going to have to put in that work, work, work, work, work! #Rihanna You should rehearse your songs until you can sing them in your sleep. Video yourself singing and then critique the video. What worked? What didn’t work? What was the best/worst part or your performance? Should something be changed? How can this performance be better? Ask yourself these questions, because you can bet your sweet bippy the judges are.

Again, don’t deliver face and phony. The judges are gonna know. Your heart should connect with the music. You should become the music. Put your personality in your performance.

Just so you know, I’m team Adam, by the way! I wish you the best on your pursuits!